Seen cheaper elsewhere?
We will not be beaten on price. If you have seen the product cheaper somewhere else, you will get it for the same price. Only difference is that we offer you 5% Cash-Back on top. A few simple rules apply on "seen cheaper elsewhere?". Read Frequently Asked Questions for more info. It doesn’t hurt to ask. Leave the link and good chance you will make a better deal with us!
Cart(0 Products)
No products found 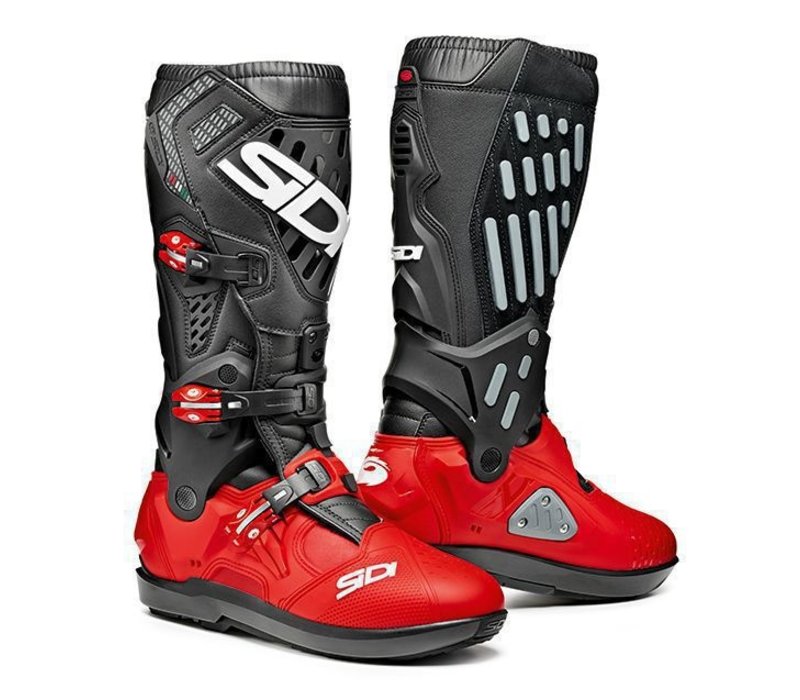 The SIDI Atojo SRS motorcycle boots are the newest in SIDI’s collection, meant to complement the SIDI Crossfire 3 SRS.

With the new SIDI Atojo SRS riding boots brought to the general public, it’s clear that when it comes to premium off road motorcycle boots, SIDI are still one of the top brands giving all the features that a motocross boot would need. This is mainly thanks to their focusing mainly in this area and they’ve made these boots with the input of world champion professional athletes Alessandro Lupino, Antonio (Tony) Cairoli, and Jorge Prado (hence AToJo from their names).

The first thing to notice with these innovative boots is that SIDI have done very well in terms of protection on this boot, though this does mean it will be on the stiffer side in terms of movement. Though if you compare it to the SIDI Crossfire 3 SRS boots, the upper part of the boot has been slimmed down a little bit with he height of the boot coming a bit lower, and a few other nice changes. This boot will be coming in at 500 Euros, or about 550 US dollars, so they’ll be competing with the Alpinestars Tech 10 and the TCX Comp Evo 2s and they’re meant to complement the SIDI Crossfire III SRSs.

For protection in the important areas, the SIDI AtojoSRS features thermoplastic armor. Almost the entire foot of the boot is covered in this including the toe, with Technomicro panels to give a bit more flexibility and protection further down the boot. Technomicro is a special material that is lighter and stronger than leather. This also gives you strong impact absorption, is water resistant, and gives abrasion resistance. Though these boots are unfortunately not waterproof.

Higher up in the more flexible parts of the SIDI Atoho SRS is stiffer Technomicro, which shows where SIDI have gotten rid of a bit of that weight. On the inside of the boot are plenty more rubber grips inset on hardy suede to help with engine heat and give better grip. With all this protection, it’s no surprise that these boots are CE level 2 certified. Overall, this has led to the SIDI AtojoSRS shoes being lighter than previous models weighing about 1720 grams, which is 430 grams than the SIDI Crossfire Three SRSs, which weighed about 2150 grams.

The big advantage of the SIDI AtohoSRS is its replicability. You can take almost all of the armor off, replace it, and then go off again. That is why we have all of these screws covering the boot. Even here on the sole. The cool thing is that you can change the sole as well with different rubber inserts. This is one of the things that really distinguishes this boot from its competitors like the Alpinestars Tech10 and the TCX Comp Evo II, for example. The toe and heel cannot be replaced, this has been part of their reinforcement to the inner sole, but these areas should last well from wear and have plenty of grip too.

Starting at the bottom, you get the option of a smooth sole on the boot, which is in the box, and an endurance sole with extra grip, and the replacement system is really easy with just a 90-degree twist to each screw.

Around the rest of the toe and ankle, is thermoplastic and more Technomicro that continues all the way up the boot. On either side at the bottom of the ankle, there are also got two small vents at the bottom of the boot. So, this boot will be on the hotter side, though this will mean a bit more safety and less chance of anything getting in there. Around the ankle also, each of these flat panels can be replaced as well as the extra nylon protection on the inside of the ankle.

This boot comes with 3 big buckles, compared to the Crossfire 3’s 4, and they have been made for strength. They can be adjusted for however tight you need with a ratchet system on the inside and the whole buckle system is replaceable. Then, there is more raised armor underneath them to protect the buckles from getting knocked open or damaged. Essentially, they are meant to stop things from getting underneath the buckles and popping them off.

Like the Crossfire 3s these are stiff boots. This boot features three pivots to prevent you hyperextending your ankle. In the front, you do have this replaceable slider in the front to prevent acting as one of these anti-hyperextension systems while on either side of the ankle are two pivots that give you support bracing and show a slimming of the ankle to reduce thickness. So, this stiffness is on purpose and it will help protect your ankles from damage in a spill.

To open the shoe there is a large Velcro panel at the top in addition to the 3 buckels. This is so you can adjust the fit if need be, so overall, this boot is giving you plenty of adjustability with ratcheted buckles and Velcro at the top to give you a nice tight fit. You’ve also got additional material between the tongue and the boot to give you a wider fit without having to lose any coverage. The bottom of the shoe’s liner is made of Cambrelle, which makes it abrasion resistant and moisture wicking so it’ll dry quickly. From there to the middle of the calf is jersey treated Air Teflon Mesh with that additional Teflon protection to stop water and sweat from seeping into the boot which will help keep it fresh and nice after a day of riding.

The SIDI Atojo SRS boots are top off roading boots, with a big focus on protection at a reduced weight and complement the SIDI Crossfire 3 SRS boots very well. The big pluss about these boots is their lightweight, strong protection, and innovative system for replaceability that lets you both customize and keep costs down on this boot if one-part needs fixing. If you’re still curious about these boots, then don’t forget to watch our SIDI Atojo SRS Boot Review Video.